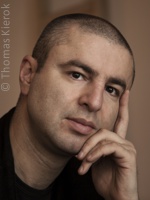 Nikola Madžirov was born in 1973 in Strumica (Macedonia). He is one of the country‘s greatest lyricists, and has received numerous awards and grants, including the literature award Studentski zbor for his poetry anthology Zaklučeni vo gradot (Locked in the City, 1999), the Aco Karamanov Award for his poetry anthology Nekade nikade (Somewhere Nowhere, 1999) and the Hubert Burda Award for his latest publication, Premesten kamen (Displaced Rock, 2007).

Madžirov is the Macedonian coordinator of the international network Lyrikline. His lyrics have been translated into 18 languages, and are the basis of two short films, filmed in Sofia (Bulgaria) and Zagreb (Croatia).