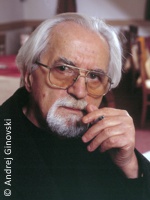 Petre M. Andreevski (1934–2006) was born in the town of Sloeštica, near Demir Hisar, in the southwest of Macedonia. In the 60s, he started making a name for himelf as a poet. In 1980, he published his first novel, titled Пиреј, till today one of the most widely read books in the country. For his novels and poetry collections he received several accolades. In addition, he also wrote short-stories, plays, and children’s books. He was a member of the Macedonian Writers’ Association, the Macedonian PEN Centre as well as the Academy of Arts and Sciences.