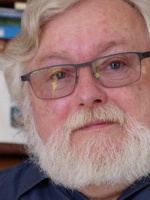 Jean-François Haas, born in 1952, used to work as a teacher. In 2007, the French-speaking Swiss turned to writing. For his debut novel, Dans la gueule de la baleine guerre, he was awarded the Schillerpreis der Schweizerischen Schillerstiftung. Several other novels followed, among them Dunkler Weg zum Teich and Le testament d’Adam. Haas lives in the canton of Freiburg.