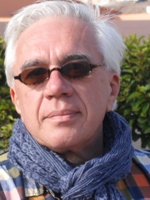 Jean-Louis Courriol, born in France in 1949, is a Professor of French, Latin and Greek at Lyon University. His PhD focussed on Romanian literature and its translation into the French in particular. He counts among his translations into the French a string of notable works by Romanian authors such as Mihai Eminescu, Liviu Rebreanu, Camil Petrescu, Cezar Petrescu, Marin Sorescu, Augustin Buzura, Ion Băieșu, and Bogdan Teodorescu. Jean-Louis Courriol is the founder of the International Liviu Rebreanu Institute for the study of literary translation as well as simultaneous interpreting. For his efforts to promote Romanian literature in the world he was awarded the Eugen Lovinescu Prize. He received several other accolades, including the Eminescu Translation Prize and an honorary degree from the Universities of Pitești and Timișoara.