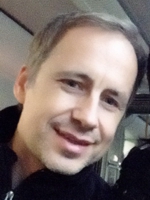 Nikola Čolović was born in 1969 in Belgrade. In 1981, at the age of twelve, he moved to Hamburg in north Germany. After high school, he served the community service and then enrolled to the University of Hamburg to study first applied linguistics as well as English studies, and then philosophy and Romance languages with a major in Italian language and literature. During and after his university studies, he worked as a freelance translator for various companies and translation agencies in Germany and between 2006 and 2009 in China. Since 2006, he has been translating essays written by his father Ivan Čolović, from Serbo-Croatian to German, including the essays that were published in 2011 under the title Kulturterror auf dem Balkan [Cultural Terror in the Balkans].