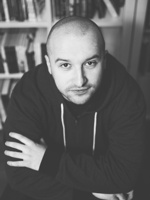 Ivan Šopov studied General and Comparative Literature in Skopje. Since 2012, he has been working as an editor for the publisher Templum and the website okno.mk. His publications include the shorty story collections Азбука и залутани записи (2010), winner of the „Novite Prize!“, and 091 – антиразгледници од Скопје (2017), as well as the poetry collection Меше на годината (2012). Selected poems and stories have been published in English, Serbian and several other languages. In addition, Šopov works as a literary translator, having translated several works into Macedonian.