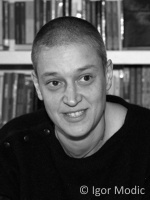 Anja Golob, born in 1976, is a Slovenian poet. She studied philosophy and comparative literature in Ljubljana and first worked as a theatre critic. Her reviews appeared mainly in Večer, Slovenia’s second largest daily newspaper. Today Anja Golob is editor-in-chief of the publishing house VigeVageKnjige, works as a dramaturge and translator from German and English, and writes newspaper articles. In 2010, she published her first volume of poetry, V roki. This was followed by the poetry collections Vesa v zgibi (2013) and Didaskalije k dihanju (2016), for which she was awarded the Jenko Prize for Poetry in 2014 and 2016.