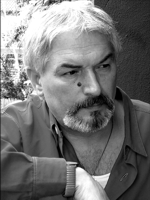 Andrei Zanca, born in Sighișoara in Transylvania, studied German language and literature in Cluj. He worked during his studies as an editor oft he German speaking literary magazine Echinox. From 1982 to 1989, he was a teacher at a secondary school in Sighișoara. In 1991, he moved to Germany and started to study in Freiburg. Andrei Zanca now lives and works in Heilbronn. He is author of numerous books of poetry, volumes of essays, short stories, a diary, and of a number of translations from German to Romanian (Franz Kafka, Hans Magnus Enzensberger, Reiner Kunze, Paul Celan, Werner Dürrson, Michael Krüger, Ingrid Bachèr, Richard Wagner, Richard Reschika, Kurt Drawert, Dieter Schlesak, Lichtenberg, Anette von Droste-Hülshoff, Uwe Timm). He also translates to English, French, Italian, and Spanish. He writes critiques, reviews, and essays for various literary magazines and anthologies in Romania, Germany, France, Switzerland, Chile, and USA. He works as an editor for German literature with four literary magazines from Romania and Germany and is a member of writers’ associations of Romania, Baden-Wuerttemberg and Bavaria.