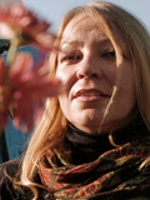 Daniela Tkalec was born in 1963 in Zagreb. She went to school in Germany but return to Croatia to study German and French languages and literatures in her home city. After graduation she had worked as a German teacher before she devoted herself to translation. She translated works by Franz Werfel, Novalis, Johann Wolfgang von Goethe, Gustav Meyrink and Hildegard von Bingen from German to Croatian. Later she was also a book publisher as she founded the Scarabeus publishing house that published books on philosophy, anthropology and history of religion as well as fairytales and fantasy literature.