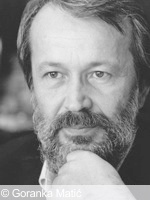 Stevan Tontić, born in 1946 in Sanski Most (Bosnia and Herzegowina), studied philosophy and sociology in Sarajevo. He has published eleven volumes of poetry, one novel and two books of essays and published numerous anthologies of modern poetry (Bosnia and Herzegovina, Serbian, Croatian and Bosniacian poetry of the 20th century) and modern Serbian poetry. After almost nine years (1993 – 2001) in German exile (Berlin), he is now living in Sarajevo again. Stevan Tontić has translated many books from German into Serbian. In addition to several prizes in Bosnia and Serbia, in Germany he has received the Horst Bienek Prize of the Bavarian Academy of Fine Arts and the “Literature in Exile” prize of the city of Heidelberg.