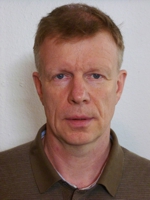 Andreas Tretner was born in 1959 in Gera, in the eastern part of Thüringen, and today lives on the north-western edge of Berlin. He studied interpretation and translation in Leipzig and worked as an industry-specific translator, publishing house and newspaper editor, and media studies teacher. Since 1992 he has been working as a translator, mostly from Russian, translating the works of Victor Pelevin, Vladimir Sorokin, Mikhail Pavlovich Shishkin, and Pjotr Ilitschewski. Occasionally he also translates from the Bulgarian, for example works of Jordan Raditschkow, Peyo Yavorov, and Christo Karastojanow, and the Czech, for example works by Josef Škvorecký and Jáchym Topol.