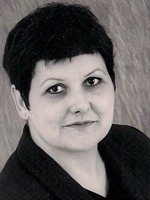 Dagmar Vohburger, born in 1966, studied journalism in Berlin. She works for various daily and weekly newspapers, radio stations and PR agencies. In 2004 she was press spokeswoman for the International Women’s Film Festival in Cologne, in 2005 she was co-author of the radio feature “Crossword puzzle Bosnia” (Deutschlandfunk) and from 2006 until 2009 she was the Serbian correspondent for n-ost (Netzwerk für Osteuropa-Berichterstattung e.V. [The Network for Reporting on Eastern Europe]). Dagmar Vohburger translates with Dragoslav Dedović from Serbian into German.