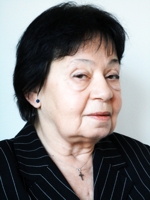 Truda Stamać, born in 1942 in Petrovaradin, studied Comparative Literature and German in Zagreb. In addition to her work as a literary translator she firstly worked in the library of the German Cultural Institute and then studied Philosophy for a year in Vienna. She then worked as a consultant on cultural matters at the Croatian Cultural Office and later in the Croatian Ministry of Culture. After many years of working as a Cultural Advisor in the Croatian Embassy in Austria, she returned to the Ministry of Culture. From 1990-1993 she was the President of the Society for Croatian-Austrian Friendship. She won many awards for her translations, including the Austrian Honorary Cross for Science and Art. She was the Editor of several anthologies and translated many books, including works by Thomas Bernhard, Paul Celan, Rainer Maria Rilke, Ingeborg Bachmann, Günter Grass, Hermann Hesse, Georg Büchner, Bertolt Brecht, G.E. Lessing, Walter Benjamin and Hans Küng. Stamać died in January 2021.