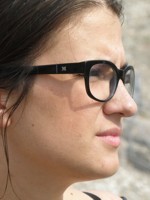 Hana Stojić, born in 1982 in Sarajevo, studied at the Faculty of Translation Studies at the University of Vienna. She is co-editor of the publications Izgubljena mjesta and Žene u Bosni i Hercegovini for the Goethe Institute in Bosnia and Herzegovina. In 2010, she initiated and organised Bosnia and Herzegovina’s first appearance at the Leipzig Book Fair. She has translated Elfriede Jelinek (Liebhaberinnen) (title of the English translation: Women as Lovers) and Saša Stanišić (Wie der Soldat das Grammofon repariert) (title of the English translation: How the Soldier Repairs the Grammophone) into Bosnian. Her translation of the collection of poems Abzeichen aus Fleisch [Emblems of Flesh] by Faruk Šehić has also been published in German. Awards: Translation Prize from the Austrian Federal Chancellery for the translation of Die Liebhaberinnen (2006), “Farah Tahirbegović” Literary Award for young cultural players in Bosnia and Herzegovina (2010). Since 2014 Hana Stojić is head of the project TRADUKI.