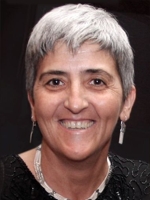 Flaka Surroi, born in 1963 in Prishtina, studied at the Faculty of Law at the University of Prishtina. She is the owner and manager of the largest Kosovan media company, KOHA, which incorporates the daily newspaper KOHA Ditore, the television station KohaVision, the news channel ARTA, the portal KOHA.net, KOHA Print and the publishing company Botimet KOHA. She previously worked for several years in the Kosovan Employment Office, volunteered at the Council for the Defence of Human Rights and Freedoms and was a local employee at UNICEF. From 1999 to 2004 she ran the Community Development Fund. Flaka Surroi has regularly published columns in KOHA Ditore and has translated books from English, Spanish and Serbian.