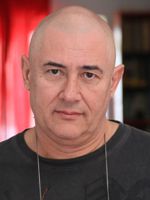 Victor Scoradeţ, born in 1953 in Romania, studied German language and literature at the University of Bucharest. After graduation, he worked first as a German teacher and later as an editor and theatre critic at various newspapers and magazines (New Way daily newspaper, New Literature monthly, and the cultural magazine Contemporanul – Ideea europeana). He wrote theatre critiques and essays for many daily and weekly newspapers. Today, he works as a translator and theatre director and is the artistic manager of the Teatrul Arca in Bucharest that he established in 2004. He has translated numerous theatre plays of notable writers such as Bertolt Brecht, Thomas Bernhard, Friedrich Nietzsche, Günter Grass and many others. Victor Scoradeţ received The Order of Merit of the Federal Republic of Germany in 2014. Further awards: he received the Award of the Romanian Theatre Association for his theatre critiques (1994) and the Goethe Medal (2009).