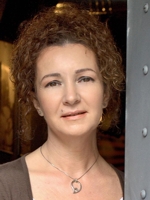 Milena Selimi, born in Tirana in 1968, studied Albanian language and literature. She worked at Radio Tirana for many years, was the editor of the magazines Kult, Jeta, and ABC, was a BBC correspondent, wrote several scenarios for children’s plays and is currently employed at  The Cultural Centre in the city of Tirana.

Milena Selimi translates from Bulgarian, Italian, Macedonian, Serbian and Croatian and is the author of the novel Nata e një Gruaje and the poetry anthology Muzgu binjak me endrren. So far, she has translated Dejan Dukovski, Svetislav Basar and Edo Popović. In 2010 she became the first recipient of the “Marko Marulić” writer in residence programme in Split and took part in the translator in residence programme in Sarajevo.