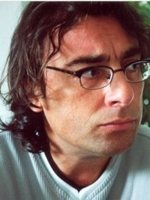 Slavo Šerc, born in 1959 in Maribor, studied Slovene Language and Literature and Comparative Literary History with Literary Theory in Ljubljana. In the years 1984/1985 he also studied German as a Foreign Language in Hamburg. He worked as a visiting lecturer of Slovene at the University of Regensburg and the University of Munich. Slavo Šerc has published numerous essays, columns, and radio features for Slovene media outlets. The year 1996 saw the publication of his book Nemška književnost danes [German Literature Today] and 2010 the publication of his book In potem je padel zid [And Then The Wall Came Down]. In his work as a translator, he focuses primarily on contemporary German literature and philosophy. Among his translations one can find the works of Elfriede Jelinek, Urs Widmer, Herta Müller, Thomas Brussig, Peter Stamm, Judith Hermann, Sven Regener, Feridun Zaimoglu, Robert Walser, Martin Walser, Hans Keilson, Wolfgang Hilbig, Walter Benjamin, and Peter Sloterdijk. Moreover, he has published two anthologies of short-stories from German, Austrian, and Swiss authors, selected and translated into Slovene by himself.