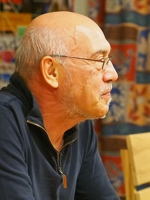 Milan Soklić, born in 1955 in Tuzla, studied philosophy and sociology at the University of Sarajevo. With other intellectuals, he formed the artistic group “Tijelo – Prostor” (Body – Space). In March 1983, all activities of the group were prohibited and he was sentenced to five years after the paragraph 133 of Yugoslav criminal law (enemy propaganda). After being released early due to changed political circumstances in August 1985, he took up a postgraduate study in Sarajevo. After finishing with a master’s degree in 1989, he started to work at the Centre for Philosophical Research at the National Academy of Science and Arts of Bosnia and Herzegovina. As the war broke out in Bosnia and Herzegovina in 1992, he fled to Germany and subsequently worked at the George C. Marshall Center in Garmisch-Partenkirchen as a teacher for South-Slavic languages. In 2006, he moved in his family to Pula, Croatia, where he still lives today. Since 2007, he has been working as a freelance translator from German. He translated works of Immanuel Kant, Peter Sloterdijk, Thomas Mann, Gustav Meyrink and Joseph Roth.