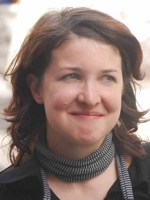 Annemarie Sorescu-Marinković was born in 1978 in Pitești. She studied Romanian and English at the Department of Philology in Timișoara and received her doctorate in 2010 in Cluj-Napoca. She currently lives in Belgrade. She works as a translator and editor in Timișoara, taught Romanian at the Department of Philology in Belgrade, and has been working as an academic researcher for the Balkanological Institute of the Serbian Academy of Sciences and Art. Annemarie Sorescu-Marinković has translated the novels Kutija od orahovog drveta by Nikola Milošević (2004) and Hansenova djeca by Ognjen Spahić (2010) and others into Romanian.