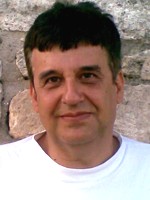 Aleksandar Prokopiev, born in 1953 in Skopje, studied in Belgrade at the Faculty of Philology, the Department of General and Comparative Literature, and obtained his Ph.D. in the subject of Comparative Literature and Literary Theory in Belgrade and at the Sorbonne in Paris. He now teaches at the Institute for Macedonian Literature at the University of Skopje. Aleksandar Prokopiev has published numerous books and has already been translated into English, French, Italian, Japanese, Russian, Polish, Hungarian, Czech, Slovakian and other languages. He himself translates from Serbian, Bulgarian, Bosnian, Croatian and Slovenian into Macedonian. Amongst others, he has translated works by Danilo Kiš, Tatjana Rosić, Vladislav Bajac, David Albahari (Serbia), Bojan Biolcev, Alek Popov (Bulgaria) and Miljenko Jergović (Bosnia and Herzegovina).