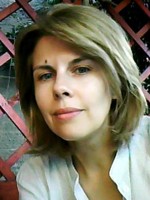 Cătălina Puiu, born in 1969, studied Bulgarian and Romanian language and literature in Bucharest. She then gained a master’s degree and later a doctorate in Slavic languages and literature. She works as a lecturer in Bulgarian language and literature at the University of Bucharest and is co-author of several scientific publications and literary anthologies. Since 1998, she had been a member of the board of the Romanian Slavists’ Association. Cătălina Puiu translates from Bulgarian into Romanian. Her translations include works by Bojan Biolcev and Georgi Gospodinov.