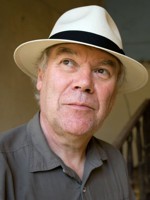 Joachim Röhm was born in 1947 in Stuttgart. From 1966 he studied German Language and Literature in Tübingen and took part in the student movement. As a later consequence of this he went to Albania, where he worked from 1977 to 1980 in the publishing company for foreign literature in Tirana and learnt the Albanian language and the tools of the trade of a translator. Since this time he has been intensively concerned with the Albanians, their history and culture, their customs, their language and, above all, their literature. After returning to Germany he firstly worked in a factory, to provide an income, translating Albanian literature alongside this. He has been a freelance translator since 1990. Joachim Röhm is the holder of the Jane Scatcherd Prize of the Heinrich Maria Ledig Rowohlt Foundation and of the Jusuf Vrioni Translators’ Prize of the Republic of Albania. He lives in Stuttgart, Munich and Tirana.