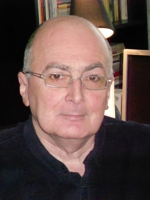 Alexandru Al. Şahighian was born in 1950 in Bucharest. He visited a German school there and studied German studies at the University of Bucharest. Since 1990, he has been a member of the translators’ section of the Romanian Writers’ Association. He was an editor of magazines Secolul 20 (1977–1994) and of the Romanian edition of Lettre Internationale (1994–2009), and a dramaturge at the Jewish National Theatre in Bucharest (2003–2014). He has translated works of Herta Müller, Canetti, Nietzsche, Jean Améry and Günter Grass. Awards: shortlisted for the translation prizes of the Romanian Translators’ Association and the Romanian Book Indusrty (for Herta Müller and Günter Grass), Translatior Award of the magazine Observator Cultural, 2013.