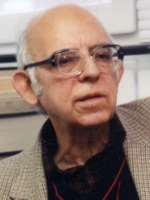 Gancho Savov, born in 1930 in Pernik, Bulgaria, studied Slavic Language and Literature in Yugoslavia, Poland and Czechoslovakia and then worked as an editor of cultural affairs in various newspapers, as well as an academic at the Institute for Balkan Studies at the Bulgarian Academy of Sciences (BAN). In 1974 he was accused by the Communist regime of high treason and of “ideological deviation” and sat in prison as a political detainee until 1985. He was socially isolated until 1989 and earned his living as an ordinary worker. It was only after the political change that he was completely rehabilitated and took up his work again as editor and academic at the Academy of Sciences. He is now Honorary Professor at the Professorship for Slavic Studies at the University of Veliko Trnovo. He works as a writer and has translated numerous books from various Southern Slavic languages into Bulgarian – and vice versa. Gancho Savov has received several awards for his work as writer and translator.