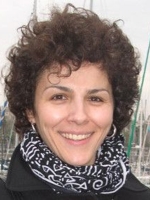 Paola Petrić, born in 1975 in Belgrade, studied German Language and Literature at the University of Belgrade. During her studies she completed a one-year professional further training at the University of Hanover. She also completed studies at the Diplomatic Academy in the Ministry of Foreign Affairs of Serbia and Montenegro. She worked as a class assistant in German Language and Culture at the Law Faculty of the Union University in Belgrade. She currently works as Project Coordinator at the Heinrich Böll Foundation. Since the end of the 90s Paola Petrić has translated from German into Serbian in the key areas of Politics, Philosophy and Literary History. She has translated for the “Kikinda Short” short story festival, the newspapers Polja and Severni bunker as well as for the internet portal Peščanik. Since 2010 she has worked with Karpos publishing house, which in 2011 published her translation of Gib ihm Sprache Hans Joachim Schädlich).