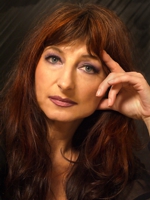 Sonja Polanc, born in 1956 in Samobor (Croatia), studied philosophy and comparative literature in Ljubljana. She has been a freelance artist since 1988. She acted in many notabe theatre performances and won national and international awards. For many years, she focused on her work at radio and television, for which she also received several honors. She works today mostly as a literary translator. She is a co-founder of Zrakogled publishing house and translates contemporary literature from Croatian, Serbian, Bosnian, and Montenegrin to Slovenian. She translated, among others, works by Slavenka Drakulić, Dubravka Ugrešić, David Albahari, Miljenko Jergović, Semezdin Mehmedinović, Srđan V. Tešin, Miro Gavran and Daša Drndić.