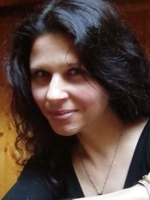 Ioana Cristina Pop, born in 1966 in Bucharest, attended the Embassy School in Warsaw in the GDR (1973-1977) and the French Embassy school (1977-1979). In Romania she continued her school education at the German Grammar School for Girls, Bucharest and at various Art Lycées. She then studied Oriental Languages (Japan-English) at Bucharest University. After completing her studies she was grant holder at the Japanese Foundation Language Institute in Japanese Saitama. Ioana Cristina Pop worked as an interpreter for Japanese, as a teacher in secondary schools for girls, as a primary school teacher at the Goethe German College in Bucharest and as Assistant at Bucharest University. She translates from Japanese, German and French and writes poems and literary essays. Her translations from German include works by Hugo von Hofmannsthal (Lucidor) (title of the English translation: Lucidor) and Friedrich Dürrenmatt (Der Richter und sein Henker (title of the English translation: The Judge and his Hangman; Der Tunnel (title of the English translation: The Tunnel).