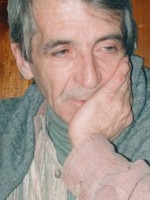 Hristo Popov, born in 1940 in Debnevo, studied Slavic Philology in Sofia. He worked as an editor for Bulgarian National Radio. From 2003 to 2005 he was Chief Secretary of the Bulgarian Translators’ Association. Hristo Popov is an editorial member of the journal for foreign literature and the art of translation, Panorama. He translates lyrics from the Slavic languages into Bulgarian; his translations include poems by Miodrag Pavlović, Ljubomir Simović, Borislav Radović, Milutin Petrović, Duško Novaković, Vladimir Kopicl, Radmila Lazić, Novica Tadić, Vasa Pavković, Milovan Marčetić, Gordana Ćirjanić, Snežana Minić and Gojko Božović. The Bulgarian edition of Nebeski pansion with poems of the Bosnian-Herzegovinian lyricist, Mile Stojić, appears in his selection and translation.