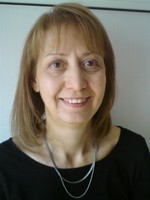 Mirjana Popović, born in 1954, went to school in Munich, Belgrade and Hamburg and thereafter studied German Language and Literature and Sociology in Belgrade. She then worked as a clerk for foreign payment transactions at a bank, as a translator and editor at TANJUG, as a translator and journalist for the daily newspapers Blic and Glas Javnosti and finally as a translator for the consulting company CMS. In addition, she gained a reputation as a literary translator. For this activity, she was awarded the Sergei Slastikov translation prize for children’s literature.