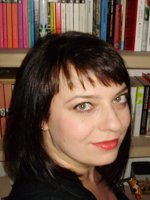 Ana Pranjković Karas, born in 1982 in Zagreb, studied German philology, Hispanic philology, and Portuguese philology at the Faculty of Philosophy at the University of Zagreb. Since 2005 she has been assisting in the compilation of an updated and improved Croatian-German dictionary. She is a member of the Croatian Association of Literary Translators and has organised and lead literary translation workshops at the Goethe-Institut and the Austrian Cultural Forum. In 2011 she was a recipient of the Schritte-Stipendium grant of the LCB Berlin and participated in its Summer Academy for Translators of German-Language Literature. Between the years 2013 and 2015 she worked on TransStar Europe, a project to promote literary translation and literature. Among her translations are the works of Thomas Bernhard, Eugenio Coseriu, Pablo Casacuberta, and Hans Magnus Enzensberger. In 2012 she was awarded the translation prize of the Austrian Federal Chancellery for her translation of Thomas Bernhard’s Die Kälte. Eine Isolation (Cold – Gathering Evidence). Since 2015 she has been living in Luxembourg, where she works as a translator for the Directorate-General for Translation.