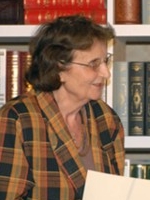 Viorica Nişcov, born in 1936, studied German Language and Literature in Bucharest. From 1962 to 1998 she was a member of staff at the Institute for Literary History and Literary Science of the Romanian Academy, from 1970 to 1971 she was the Humboldt grant holder. The focal points of her research are German Romanticism and Romanian fairy tales. She has been a member of the Romanian Writers’ Association since 2007. Viorica Nişcov has offered numerous publications, from essays to monographs, editions and bibliographies right up to translations (including Novalis, Ricarda Huch, Ernst Jünger, C. G. Jung, Martin Walser, Gershom Scholem). Her work has received several awards: in 2008 she received the prize of the journal Poesis for the best edition of the year, likewise in 2008 she received the Translators’ Prize of the Allianz Cultural Foundation and in 2011 she received the Prize of the Romanian Publishers’ Association for the best translation of the year.