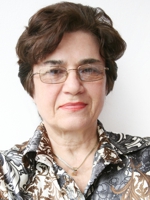 Donika Omari was born in 1936 in Tirana, where she has been living until today. She studied Albanian language and literature and has been working as a publicist and translator from Italian and French to Albanian. She translated works of writers G. de Maupassant, M. Pagnol, F. Mauriac, G. de Nerval, N. Sarraute, A. Maalouf, U. Eco, N. Ginsburg, V. Brancati etc. For her translation of Eco’s novel The Name of the Rose she received the International translation Prize of 1997, awarded by the Italian foreign ministry. She also published the book Interrupted culture (Tirana 2010), wrote numerous essays and articles on relevant literary and political topics and edited anthologies of Albanian fairytales and Italian poetry of the 20th century.