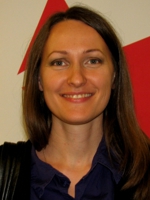 Ana Jasmina Oseban was born in 1978 in Celje, Slovenia. She studied translation and interpretation (German, English, Slovenian) in Maribor and in Graz and social pedagogics in Ljubljana. She translates German literature (both poetry and prose) to Slovenian and variety of other texts from English, Croatian and Serbian to Slovenian. She has translated works by authors such as J. Roth, R. Musil, F. Grillparzer, S. Zweig, H. Böll, C. Wolf, S. Lewitscharoff, S. Nadolny, J. Franck, H. Domin and R. Ausländer. She received fellowships from the S. Fischer Foundation and the Robert Bosch Foundation and paid residential visits to the European Translators’ Collegium in Straelen and to the Literary Colloquium in Berlin. In 2013, she received the Radojka Vrančič Translator Prize.