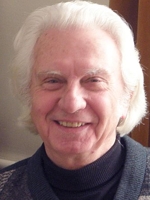 Boris Parashkevov, born in 1938 in Sofia, is Professor for Historical Grammar and History of the German language. He studied German Language and Literature and from 1964 to 1967 was a Ph.D. student at the University of Leipzig. After completing his studies he became an Associate Professor at the St. Clement of Ohrid University of Sofia, where he taught until 2005. He was also a Lecturer in Bulgarian at Helsinki University (1974-1978) and Guest Professor at the University of Delaware (1989). At the beginning of the Eighties he received a grant from the Alexander von Humboldt Foundation, which awarded him the AvH-Prize in 1994. Boris Parashkevov has translated well-known authors, including Johann Wolfgang Goethe, Martin Luther, Hans Jakob Christoph von Grimmelshausen and Rudolf Steiner. In 2005 he published a free adaptation of the Middle High German original of the Nibelungenlied.