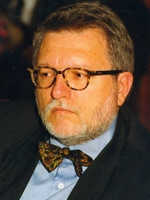 Borislav Pavlovski, born in 1950 in Bjelovar, studied at the Department of Philosophy of Zagreb University, where he now heads the chair of Macedonian Language and Literature. He was chairman of the Croatian-Macedonian and the Croatian Philological Association. Borislav Pavlovski published a collection of anthologies, numerous scholarly pieces, critiques and essay, wrote articles for lexicons and encyclopaedias and is the author of two Macedonian dictionaries. He has been translating from Macedonian and Bulgarian for more than 30 years. He received the medal of the Department of Philosophy of Zagreb University in 2000 and the Apostle Paul medal of the Macedonian government in 2001 for his academic work. He was awarded an honorary doctor title by Skopje University in 2008.