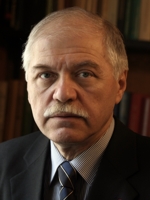 University Professor, Dr. Vladko Murdarov, born in 1948 in Sofia, studied Bulgarian, and German Language and Literature at Sofioter University and works at the Institute for Bulgarian Language at the Bulgarian Academy of Sciences. In 2001 he received the Honorary Cross of the Republic of Austria for Science and Art, in 2002 the Austrian State Prize for Literary Translation and in 2004 the Major National Prize, “Hristo G. Danov”. He has been a member of the European Translators’ Colloquium since 2009. Vladko Murdarov is the author of 15 books and more than 880 essays in journals in Bulgaria, Austria, Germany, Poland, Croatia and the USA. He has published translations of numerous, well-known German-speaking authors, including Goethe, Schiller, Wedekind, Rilke, Artur Schnitzler, Robert Musil, Ödön von Horvath, Bertolt Brecht, Erich Kästner, Elfirede Jelinek, Thomas Bernhard, Peter Handke and many more.