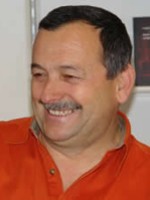 Jovan Nikolaidis, born in 1950 in Ulcinj, worked from 1974 in Sarajevo for the daily newspaper, Oslobođenje. At the beginning of the 1990s he returned to his hometown of Ulcinj and since then has devoted himself to the cultural dialogue between Montenegro, Croatia, Bosnia and Herzegovina and Albania. He founded the publishing company Plima and initiated the Montenegrin-Albanian cultural journal Plima-Batica. He is also the initiator and editor-in-chief of the first Albanian-language magazine in Montenegro, Kronika. His most important works as a writer include the novels Velaskez and Valdinos 33, the chronicles Ulcinjska pisma and Fosforne brojanice as well as his political commentaries Crnogorska krivica about the guilt question of Montenegro.