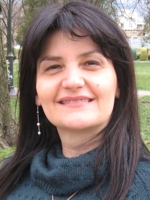 Prof. Dr. Zorica Nikolovska, born in 1964 in Skopje, studied German and by 1987 was already a professor of German Language and Literature. After postgraduate studies in German literature, in the context of which she received a DADD scholarship to spend a year at the University of Düsseldorf, she obtained her master’s degree in 1996. In 2003, she completed her doctorate at the Faculty of Philology “Blaže Koneski” in Skopje. Since 2004 she has taught as a lecturer and, since 2009, as an associate professor in German Literature at the Faculty of Philology. Prof. Dr. Zorica Nikolovska has penned numerous literature papers and is a member of the board of the Macedonian Association of Translators. She translates poetic and epic works from German into Macedonian. Her translations include works by Friedrich Schiller, Robert Musil, E. T. A. Hoffmann and Michael Ende, to name but a few.