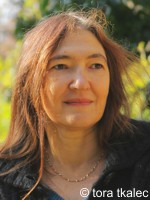 Sanja Lovrenčić, born in 1961, is a Croatian writer and translator. She has already published numerous volumes of poetry, collections of short stories and novels. She is even known as a children’s book author. She has received many awards for her work, including the 2001 Grigor Vitez-prize for the best children’s book for Četiri Strašna Fufoždera i jedan mali Fufić [Four terrible Fuf-eaters and a little Fuffy], 2007 with the Gjalski prize for the prose work of the year for the novel U za Ivanom potrazi [In search of Ivana] and 2007 with the Kiklop prize for poetry book of the year for the book Rijeka sigurno voli poplavu [The River certainly loves the Flood]. Sanja Lovrenčić also works as a literary translator from English, French and German, and was admitted to the IBBY (International Board on Books for Young People) roll of honour in 2004.