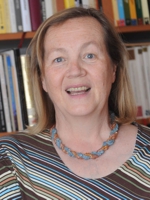 Jelena Lužina was born in 1950 in Dubrovnik. She teaches theatre arts at the Faculty of Theatre in Skopje as a regular professor. She has also established the Institute for Theatre Art in Skopje, and has carried out various national, regional and international research projects. Over the last 40 years, she has published numerous articles and essays in Croatian and Macedonian on theatre arts and literature theory. Jelena Lužina has also worked as an editor of dictionaries, anthologies, and monographs, while she published 15 of her own books as well as translated numerous texts from several languages. She is a member of the Macedonian Writers’ Association, Macedonian PEN Centre, and the Croatian Writers’ Association.