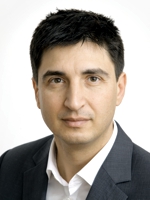 Mirsad Maglajac (born 1969) spent his childhood and school days in the town of Modriča in northern Bosnia. He studied South Slavic languages and literatures at the University of Sarajevo and came in 1993 to Berlin as a war refugee. He studied sociology, political science, and Serbian and Croatian philology at the Humboldt University of Berlin owing to the support of George Soros Foundation. Having finished the Master’s degree, he returned to Sarajevo as a coordinator of a German development program. His engagement in the development programs continued in 2002 when he became a collaborator of the German embassy in Belgrade. Since 2006, he has been living in Berlin where he works for the German Society for International Cooperation (GIZ). Together with Synke Thoß he translated the novel Das Buch Adem Kahrimans geschrieben von Nedžad Ibrišimović, dem Bosnier [The Book of Adem Kahriman written by Nedžad Ibrišimović, the Bosnian] from Bosnian to German, and he also translated numerous literary and journalistic texts for German magazines. Mirsad Maglajac received a grant from the Robert Bosch Foundation at the European Translators’ College for his work on the translation of the Nicol Ljubić’s novel Meeresstille (title of the English translation: Stillnes of the Sea). The Bosnian translation entitled Bonaca je tuga was published in 2012 in Sarajevo by the publishing house Connectum.