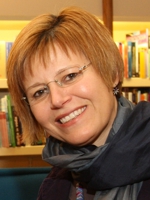 Tina Mahkota, born in 1964 in Ljubljana, works as a freelance literary translator. She studied Comparative Literature and English. To be able to concentrate on her work as a translator of literature and theatre plays she abandoned her work as a full-time professor at the University of Ljubljana in 2003. Her bibliography currently encompasses 300 publications. She has translated novels, essays, poetry, children books, and youth novels by a number of classical and contemporary authors from the English and German-speaking world, as well as somewhere around 60 theatre plays, which have been performed on Slovenian theatre stages. Tina Mahkota received both an award for her translation of the theatre play Closer by Patrick Marber in 2010 and for her translation of James Joyce’s Dubliners in 2013. For her translation of Siobhan Dowd’s Bog Child she was included on the IBBY Honour List of 2016.