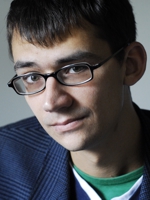 Matei Martin, born in 1978 in Bucharest, studied political science (French department) at the University of Bucharest. He is an editor at the weekly magazine Dilema veche and runs its literary supplement. He also hosts a daily culture emission on the România Cultural radio station. He is an active cultural promoter and organizes a monthly culinary-literary event in the bookstore Bastilia. He translated Böse Schafe (by Katja Lange-Müller), Beziehungswaise (by Michel Birbaek) and many essays and news articles from German. From French, he translated Fascisme et communisme, the correspondence between historians François Furet und Ernst Nolte.