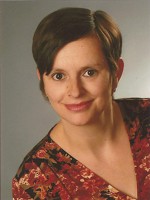 Jana Mayer-Kristić was born in1971 in Hoyerswerda. She studied in Berlin, Moscow, Vienna and Rijeka and concluded her studies at the Humboldt University of Berlin as a graduated interpreter for Serbian, Croatian and Russian languages. She has been working as a conference interpreter and translator in Berlin and was also living several years in Sarajevo and Belgrade. Her translations of literary texts from Serbian, Croatian and Bosnian have been published in several magazines and anthologies. She has also translated many radio plays and screenplays. Together with Angela Richter, she translated Das Buch vom Bambus [The Book about Bamboo] by Vladislav Bajac to German. She also co-worked on the translation of Michael Martens’ book Heldensuche [Search for the Hero] to Serbian.