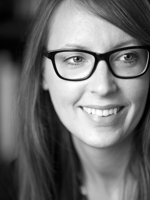 Daniela Kocmut was born in 1980 in Maribor, Slovenia, and has moved in 1991 to Hermagor/Šmohor in Carinthia, Austria. She studied translation science (Slovenian, English) in Graz and Dublin. She has been living in Graz since 1999 and works there as a translator and language teacher. She often hosts or interprets literary events and has been the head of the translation workshop at the TransStar Europa project since 2013. Daniela Kocmut received various translation grants, among other in 2009 the working grant for translation of the BMUKK, and in 2013 the translation premium of the BMUKK. She is the member of the jury of the Universitas Austria Prize. Besides her work as a translator, she is herself a poet writing in Slovenian and in German. Her published works are: Auf dem Sternenteppich [On the Star Rug] (Maribor, 2010), LICHTUNGEN 135/2013, and zwiesprachig [bilingual] (Leykam 2013).