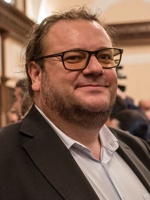 Robert Alagjozovski, born in 1973, studied General and Comparative Literature in Skopje. He has worked as an editor at various Macedonian publishing companies and magazines. Since 2010 he has run his own publishing company called “Goten” and works as an editor for the magazine “Sarajevo Notebooks”. Alagjozovski has translated several literary and scientific works, mainly from English into Macedonian (including works by Thomas de Quincey, Judith Butler, Gayatri Ch. Spivak and Zygmunt Bauman) and has also published numerous reviews, essays and articles in a variety of magazines. Stories and reviews contained his articles published in various Macedonian publishing books Florilegium (2002), Des Postmodernismus beschuldigt [Accused for Postmodernism] (2003) and Gro-Plan (2006). In 2010 he published his first novel under the title Goten.