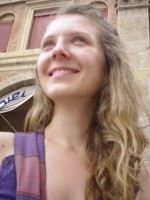 Bisera Anastasova was born in 1982 in Skopje. She studied German and English at the Department of Translation and Interpreting of the local university and, in the academic year 2004/2005, as an exchange student of the German Academic Exchange Service DAAD at the Johannes Gutenberg University of Mainz. In 2007, she established the Language Centre “Vortex”, where she still works as a translator and teacher. To date, her translations from German include works by Konrad Paul Liessmann, Franz Kafka and Elias Canetti.