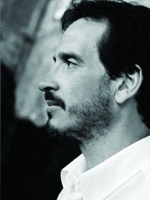 Ben Andoni, born in 1966 in Tirana, studied Geography and worked firstly at the  Hydrometeorological Institute. Since 1996 his main profession has been as a journalist. He wrote for the newspaper Koha Jone, was Cultural Editor of the newspapers Gazeta Shqiptare and Korrieri, Chief Editor of the weekly magazine ABC and Deputy Chief Editor of the magazine MAPO. He was also correspondent of the Belgrade news agency BETA and of other foreign agencies and newspapers. Ben Andoni translates from Serbian, Croatian and English. His publications include Albanian translations of the works Derviš i smrt by Meša Selimović and Tajna doline piramida by Emir Imamović Pirke.