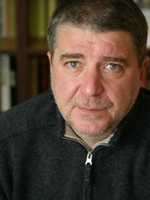 Alexander Andreev, born in 1956 in Sofia, is writer, journalist, translator, and the head of the Bulgarian editorial team at the international broadcaster Deutsche Welle (TV and online) in Bonn. He has two published prose books, while his texts have been included in several anthologies in Germany, Austria, Bulgaria, Belgium, Great Britain and Netherlands. He translated works by Günter Grass, Thomas Bernhard and Rainer-Maria Rilke to Bulgarian. In 1995, he received the first Prize of the Bulgarian Translators’ Association. He also received many awards for his journalistic work, including the Prize for Journalism of the European Commission for Bulgaria in 2008. Alexander Andreev is also a university lecturer and political advisor, ex-member of the board of EALIZ (Austria) and member of the European Translators’ Centre in Straelen (Germany).